Well, I'm not sure how that happened, but it's already been six months since the release of The Lighthouse. 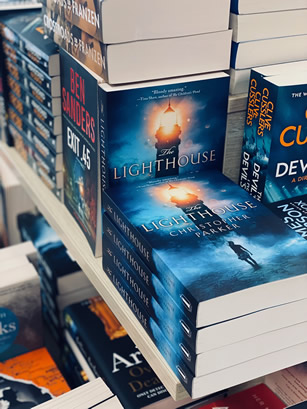 Being a self-published, debut author, I really had no idea what to expect before my novel flew out into the big wide world, but the response has been nothing short of amazing. Since going on sale, The Lighthouse has sold nearly 20,000 copies, garnered over 1000 ratings on GoodReads (and almost 1,500 on Amazon), and was shortlisted for the annual NZ Booklovers Award for Fiction. It was very gratifying as a self-published author to have my book stand side by side with other titles from bigger publishing houses and be considered in the same breath.

Hundreds of readers have generously taken their time to leave reviews - many of which have blown me away – and in addition to those I've received many kind and touching emails from people all over the world telling me about what the story has personally meant to them. Please keep them coming – hearing from readers is what makes the writing experience so humbling and rewarding.

During the last six months I was a guest on several podcasts, and I even did a few live radio interviews here in New Zealand! I'd be lying if I said I wasn’t nervous before doing these but the more I did, the more I found myself getting more comfortable. The full list of interviews can be found in the Media section, and the latest one was with The Bookshop at the End of the Internet – you can listen to that interview here.

The second novel is underway, and if you enjoyed The Lighthouse then I'm certain you'll find plenty to enjoy in the next one! To stay up to date with news about my second book, plus the title and cover reveal, please sign up to my mailing list or follow my page on Facebook.

All in all, it's been a whirlwind six months and I can’t wait to see what the next six will bring. Thank you once again to all the readers who have helped make these past six months so special. It's truly humbling to think of all the people who have now shared Ryan & Amy's story and taken a journey to Seabrook.

The Lighthouse on Goodreads